In a bemusing world of computer generated design, my sense temporarily eluded me this week in favour of convenience.

Having learnt ‘Rhino 3D’ in a drive to advance my sporadic use of CNC, laser cutting and 3D printing at university, I eagerly attended my design tutorial to discuss this weeks resulting forest floor plans and initial section.

To my tutors delight, I had chosen my site within the Scots Pine, found to the boundary of the unrivalled beauty that is Holkham bay, Norfolk. As I described the moment I mounted the tall dunes in the forest to discover an opening in the canopy, flooding the forest with light, I was briskly interrupted by my tutor, remarking how elegantly I described the experience and asking where he was to see this elegance in the floor plans I had presented on the table in front of him.

As I sighed in disbelief at how, in fact he was correct and duly ‘googled’ Peter Salter and Geoffrey Bower as instructed, my mind immediately wondered to similar comments during my previous years design work. My drawings had little if any feeling to them, they had been sterilised by machine and worst of all, I to could see it.

I returned home that evening and started sketching, tracing, photographing, tracing again, scribbling, until finally, I felt the same connection as I had during my visit to Norfolk in previous weeks. With several evenings sketching behind me and numerous visits to my bookshelf, I have now collaborated with the greats of drawing once again – Francis Ching, Alvar Aalto, Le Corbusier. I can now report that after a frustratingly enjoyable eureka moment, I am in unrelenting agreement with Corb himself, I to “prefer drawing to talking. Drawing is faster, and leaves less room for lies.”

This week has been most productive and I really feel as if I once again, have lead in my pencil. 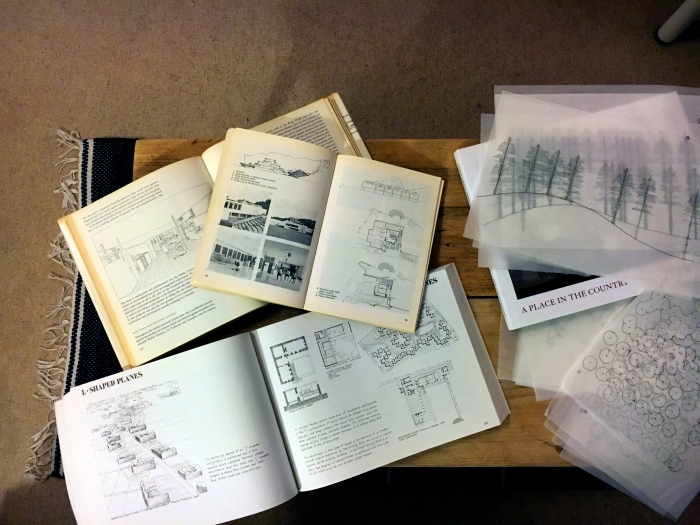